Food additives, pesticides, hormones, antibiotics… There’s so much to think about when grocery shopping. One of the most talked about choices is whether or not to buy 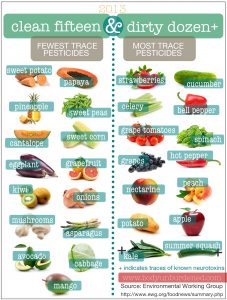 organic. In an ideal world, with an ideal budget, we could purchase all of our foods organic; but sometimes, that’s just not feasible. So which foods are worth finding in the organic section? The Environmental Working Group has created a list to help you decide just that. This list of produce contains the highest amount of chemical residues from pesticides and should always be bought organic if possible. It includes:

Now this list is great, but it doesn’t mention meats. If there’s anything that’s most confusing about which items to purchase, meats are it. Grass fed beef, free range chicken, cage free chicken, hormone-free meats, antibiotic-free meats, “USDA organic” meats… What’s does all of that mean, and why is it important?

Let’s first address why it may be important. Hormones, most often man-made estrogen and testosterone, are injected into young livestock to help them gain weight quickly. For production, this means more meat in a shorter amount of time, yielding an increase in profit. Recombinant bovine growth hormone (rBGH) is also given to cows to increase their milk production, ultimately increasing profit. These hormones are inside the meats and milk that are consumed by humans. So what does this mean for your health? Unfortunately, nobody knows for sure. What we do know is that the animals receiving these injections are on the high side of the normal range for hormones, which increases their chances of developing chronic illnesses such as cancer. The uncertainty lies in knowing what kind of a risk this creates for those consuming the products- us!

Although nothing has been proven, some scientists attribute early puberty in today’s youth to the hormone-injected animals. According to WebMD, “the amount of hormone that enters a person’s bloodstream after eating hormone-treated meat is small compared with the amount of estrogen a person produces daily”. However, that small increase in hormone levels can negatively impact certain processes within the body. Because of the unknown effects of long-term consumption, the European Union has banned all hormones in beef, and several other countries have banned rBGH. Uncertainty means it’s up to you to decide whether or not organic meats are important for you and your family.

Should you choose organic meats, look for 100% grass-fed beef. Because cows are grass-eaters by nature, it is less than ideal for a cow to be grain-fed. As far as purchasing chicken, look for “USDA Certified Organic” chicken. To be labeled as such, the chicken must been raised without the use of antibiotics and hormones in a free-range environment with no pesticides used in the soil or on the feed. Choosing the right carton of eggs can be tricky, too. Because the word “organic” can have several different meanings, you want to avoid purchasing anything, including eggs, just because it’s labeled as “organic”. USDA Certified Organic eggs come from chickens raised using the requirements listed previously so they make a great choice. You can also keep an eye out for “cage-free” eggs; these egg-laying chickens are never kept in cages and have access to the outside. Having the freedom to roam creates a less stressful environment, especially when compared to chickens that are caged or packed tightly in small quarters.

Foods have the ability to enhance or diminish your energy levels, mood, immune system function, overall health, and ability to hold each chiropractic adjustment. These are just a few of the many reasons as to why it’s important to carefully select foods for you and your entire family.

With the health craze in full swing, it is hard to miss the hundreds of articles published that discuss nutrition in terms of what you should and should not eat. Why is that even important? What you eat can affect the levels of your neurotransmitters, the structure of your cells, and can affect your mental processes – what you think and how you feel. It is therefore imperative that you choose foods that enhance those processes rather than suppress them. And while this is true for every single person, one of the most vulnerable populations is our kids.

The growing body – with its dividing cells-  is at greater risk when exposed to negative and toxic influences. Especially in the very early months of life, the blood brain barrier has not yet have fully developed, as it forms on average between the ages of 6 months and 2 years. This barrier protects the brain from substances in the blood that could harm the brain tissue and also maintains a constant healthy environment for the brain. If this has not yet formed, it will put infants at an even greater risk for toxicity. With a constant increasing rate of childhood obesity, ADHD, and asthma, there is much speculation that consumption of certain additives during those crucial developmental years may play a significant role. Therefore, less is always more when dealing with food additives.

There are over 200 known additives in the American food supply, but these are the top five that should be avoided when at all possible:

Equal (aspartame) is known to convert into formaldehyde once in the body, and is a neurotoxin (a poison that acts on the nervous system), and carcinogenic (cancer causing). Splenda suppresses beneficial bacteria in the body. There are good bacteria in the body- specifically in your digestive tract- that help you digest foods properly, so by consuming foods/drinks with Splenda, you are inhibiting those good bacteria assisting with proper digestion. Consumption of artificial sweeteners can lead to migraines, depression, memory loss, increased fat storage, seizures and brain tumors.

We’ve all seen the commercials on TV stating how HFCS is safe and is just like consuming regular sugar. But how do we know? High fructose corn syrup was discovered in 1966 and started being used in 1975. Because it is relatively new, we do not know the long-term effects of consuming it. But because it is a very inexpensive alternative to sugar, major companies have made the switch from sugar to HFCS. High fructose corn syrup is linked to an increase in LDL levels. Also, HFCS, along with regular refined sugar, contributes to the development of obesity and diabetes when consumed regularly in large amounts.

Because of the mixed publicity on HFCS, many companies are choosing not to include “high fructose corn syrup” on their labels. Manufacturers have found a way to avoid using those four “buzz words” by replacing them with an “AKA”. These AKA’s include glucose syrup, glucose/fructose syrup, maize syrup, tapioca syrup, dahlia syrup, fruit fructose, and crystalline fructose. The list will only continue to grow so it is important to stay up-to-date on the AKA’s if you wish to avoid HFCS.

MSG affects many neurological pathways of the brain, including the area of the brain that tells you when you’re full. This of course can lead to weight gain through overconsumption. MSG also acts as an excito-toxin which can overstimulate nerve cells to the point of cell death. Consumption of MSG may lead to things such as depression, anxiety, panic attacks, disorientation, eye damage, fatigue, headaches, and obesity.

You can see that Red 40, Yellow 5 and Yellow 6 are bolded. This is because they have been acknowledged to contain carcinogens, but are still found in many foods in the United States. Food dyes in general have been linked to many different kinds of cancer which is one of the several reasons Europe has removed all dyes from their food supply in 2010. Also, what’s particularly interesting about yellow 5 and 6 is that they are linked to hyperactivity including ADD and ADHD. When we look at the foods that contain high levels of dyes, we associate them with foods that kids are consuming. Is the ever-increasing rate of ADD and ADHD a coincidence? Maybe not.

Because nitrates affect the way your body uses and processes sugar, there is an increased likelihood of developing diabetes. It is believed that nitrates could also damage blood vessels by causing them to harden and narrow, which as we all know is a great recipe for heart disease. Nitrates are high in saturated fat and sodium which again can lead to heart disease when consumed in large quantities.

As you can see, there are many health concerns associated with food additives. By discussing just five of the hundreds of food additives, we have covered many foods found in the typical American diet. Is it possible to avoid them all? It’s not likely. But as a general rule of thumb when grocery shopping, it is important to use the “perimeter rule”, meaning you should purchase as many items as you can from the perimeter of the grocery store. Of course, you must still check labels and purchase items with caution as not everything in the perimeter avoids these additives. The more foods you can buy without labels the better, because if there doesn’t need to be a list of ingredients, you have avoided the very nature of an additive. Happy shopping!